skip to main | skip to sidebar

see what I got 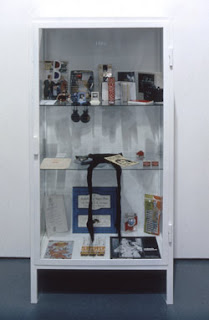 Sophie Calle is fascinated by the interface between our public lives and our private selves. This has led her to investigate patterns of behaviour using techniques akin to those of a private investigator, a psychologist, or a forensic scientist. It has also led her to investigate her own behaviour so that her life, as lived and as imagined, has informed many of her most interesting works.

The Birthday Ceremony is her first major sculptural installation. Although made in 1998 the work has its origins in the years 1980 to 1993 when Calle invented and sustained a series of private and shared rituals around her birthday. These are now manifest as art, demonstrating how closely her life and her art are intertwined. Over this fourteen-year period, aside from the occasional year of disruption, Calle held an annual dinner party on the evening (or around the time) of her birthday. To each celebration she invited a group of friends and relatives, the precise number of invitees corresponding to the number of years of her age, with one additional, anonymous guest nominated by a chosen guest, in order to symbolise the unknown of her future.

They were the most ambitious of a series of rituals Calle had invented to override an obsessive insecurity she experienced in early adulthood. The guests brought gifts, tokens of love and affection, and these Calle displayed in a glass-fronted cabinet, as a constant reminder of this affection. At the end of the year the objects were boxed up and put away, their places taken by the gifts of another birthday dinner party. At stressful moments over the years Calle was able to unpack the boxes and reassure herself of her networks of support. When she became forty in 1993, Calle realised she had been cured of this obsessive insecurity and no longer felt the necessity to recall her friendships and family ties in such a formal way. 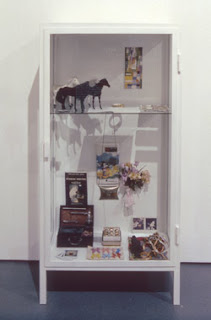 The Birthday Ceremony brings together fifteen cabinets based on the medical design of the original, which had been given to Calle by her father. Thirteen individual cabinets and one pair, each contain the gifts of a single year.

They include works of art, hand made tokens of affection, books and letters, junk and antiques, plastic trivia, items stolen from a restaurant, bottles of wine, chocolates and so on.
Posted by Lisa Jennings at 09:38 No comments: 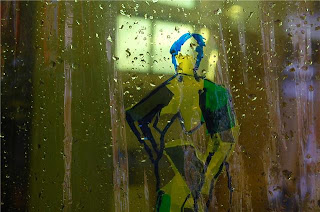 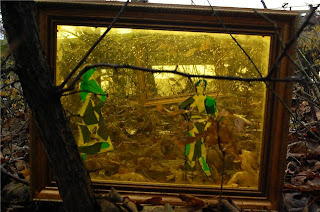 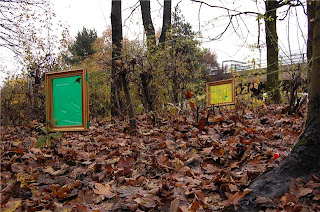 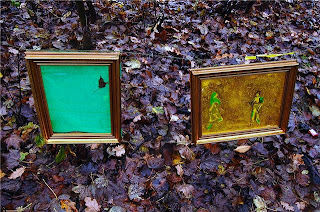 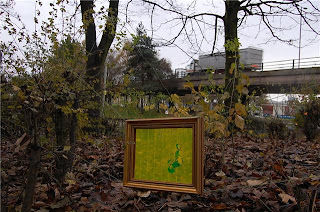 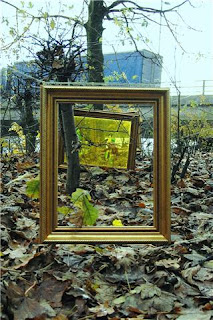 Posted by Lisa Jennings at 08:18 No comments: 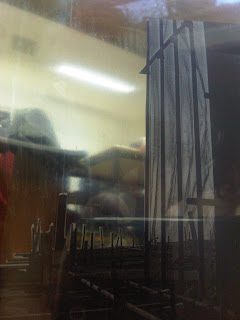 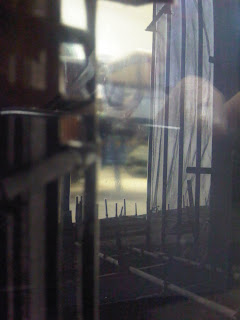 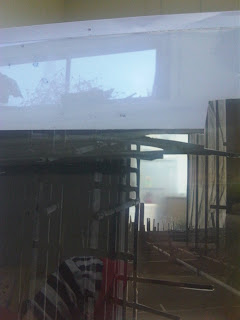 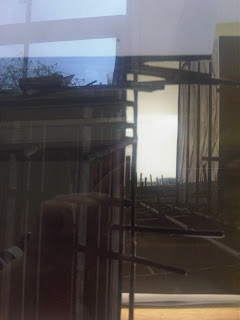 Obsessed with reflections, transparency from glass, windows, plastic everywhere in the environment - I am exploring this in a new brief at college. Picture frames, mirrors, cut-out photographs of scaffolding layered together with other images taken live in an environment - in the photos here it is a classroom.
Posted by Lisa Jennings at 05:07 No comments: 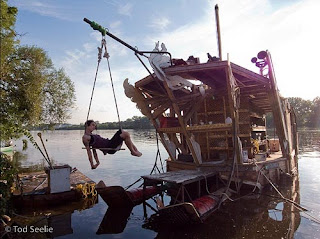 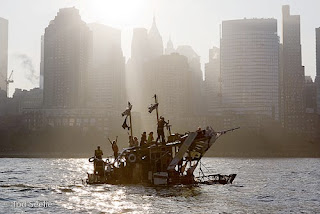 Swoon's Swimming Cities of Serinissima is the international street and installation artist Swoon's floating art project, is the kind of undertaking that puts it in the creative ranks of other optimistically adventurous events like Burning Man. With a mission of inspiring hope in a time of over-consumption and economic despair, the collection of handcrafted sculptural vessels built from salvaged materials will make their way from Slovenia to Venice, collecting beautiful things along the way, such as flowers, seeds, music and stories, to build a cabinet of wonders to share at this year's Venice Biennale. 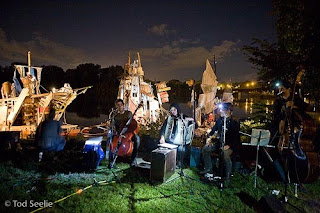 To help make this expedition a reality, Swoon—whose work has exhibited at MoMA, PS1 and Tate Modern—is selling two different limited edition silkscreen prints that are analogous to the Swimming Cities project. The first, "Serenissima," is a signed and numbered double layer silkscreen edition of 250, designed specifically for this year's venture. "Switchback Sisters," is a seven-layer, 106-edition silkscreen print on tea-strained archival paper that's an upshot of Swoon's maiden voyage, a flotilla that sailed from Troy, NY to Manhattan. The silkscreen takes its image from the 27-foot high paper-and-wood sculpture which formed the centerpiece of the resulting installation, "Swimming Cities of Switchback Sea," which will be incorporated into the new Serenissima raft. 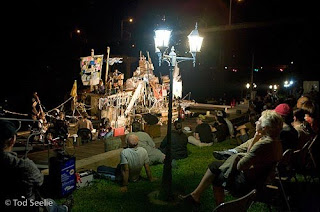 The "Serenissima" print is available for $150 and the "Switchback Sisters" print for $700. The crew of 35 artists, performers, activists and home-brewed mechanics will be throwing numerous fundraisers and events in which you can show your support, to find out more information about the ambitious project or to make a donation visit the Swimming Cities website. 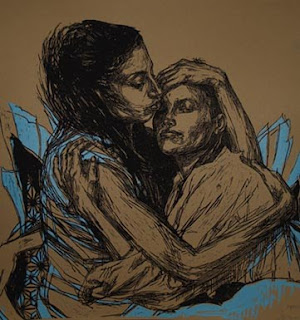 A really insightful short film on the creation and exhibition of this work is on You Tube at the link below.

http://www.youtube.com/watch?v=h9rTmTFMYH0
Posted by Lisa Jennings at 12:55 No comments: